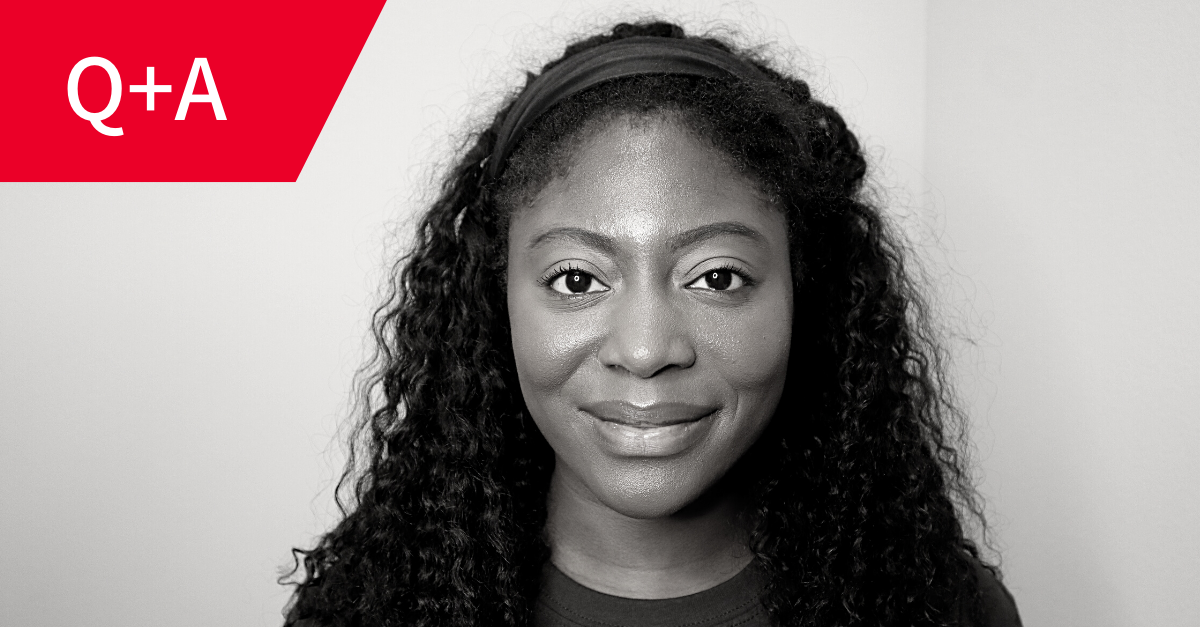 Tell us about yourself– what is your background in and how did you end up in your current position?

My journey into tech, I feel like I wasn’t like most people. If I go all the way back to high school, I just had so many different passions, and when it came time to make that decision, to have to pick a major, for me, that was like the most daunting, hardest task. I loved my history class junior year, or geometry was a lot of fun when I was a freshman. I just really had so many different passions and things I wanted to explore.

I feel like it was fate, in a way, that I ended up in computer science. I remember, I was actually in one of my favorite teachers’ offices, and I was looking through all the different college majors. I remember, coming as close as a high school student can, to picking a major for college. I went with computer science, and I ended up going to UC San Diego.

I went to college and actually did a summer program with UCSD for people with no experience. It was there where some people told me that:

This was, academically, the first time that someone told me that I couldn’t do a subject. In high school, teachers were never telling you that you couldn’t handle math or science or whatever. And that just felt wrong to me. I wasn’t going to let myself get pushed out of anything, and I deserve to be in any room I want to be in.

That experience gave me a lot of motivation when I first started, and it wasn’t until later on that I found my passion for tech until I took more advanced classes in algorithms and app-making.

From there, I did an internship with Intuit, and had my first experience with a really great and supportive team. This finally made me realize that I could see myself in the industry, and from that, I felt my confidence started to grow.

Beyond being a full-time software engineer, you also are a content creator: what has your experience been as someone who is looked up to for instruction and guidance?

It is kind of weird? Sometimes people have messaged me to say that I’m their role model or an inspiration, and I have a hard time dealing with that direct style of praise. In the majority of the content that I make, I don’t pretend to be all-knowing or anything like that. I like to show my mistakes and the ups and downs.

One video I had on TikTok that was very successful and had a ton views was me actually showing my first year grades from school. When I posted it, I wanted to take that realistic tone, but part of me was worried I would get a bunch of negativity. But instead, it was a whole lot of people– lawyers, doctors, this and that, all from different careers that are held in high regard, saying that they didn’t get the best grades all the time. That they struggled and it wasn’t all A’s. That’s life though, you know? That’s why learning exists.

More specifically, this one girl, it touched me so much because she said she was going to quit; and she’s someone who’s actually in a computer science program. She took this video as a sign for her not to quit, and then she messaged me again months later, and said she’s doing great.

Experiences like this are why I feel like it was fate for me to get into content creation and do this. When it comes to being an influencer, if I’m influencing people in a positive way, like you were going to quit something and now you’re not? Then that’s everything. That’s what content creation means for me. So many people told me I couldn’t, so I want to be the person that helps others push back on the doubt. You can be struggling, either doubting yourself or getting it from others, but it doesn’t matter– you can do it.

Part of your brand is helping others get into STEM, what is the primary motivation behind that?

There’s this trend on TikTok now, where people are like, ‘Go into tech!’ but then they don’t tell you what they do in tech, and it’s really over-glamorized. I try not to be a part of that group, and be honest in what I do.

Back in the day, when you think of tech, you might think you have to be super-smart, super-nerdy, all that. For me, that’s not who I feel like I am. I think tech is fun because you get to challenge the way you think and learn, and use critical thinking skills that you don’t see in a lot of fields. I think my primary motivation is I would rather people try working in STEM and they find it boring or uninteresting, than getting stuck in their own head thinking they can’t do it. I just want to expose more people to it and, hopefully, along the way, some people end up loving it as much as I do now.

What gives you the most hope for the future STEM?

I think something that is amazing is if you look at the numbers, more and more girls especially, but also more underrepresented communities are getting into STEM and getting into tech. The things that we are going to create will be incredible– with people bringing their personality and perspective like we have yet to see before. I think it’s more diversity that’s coming in, and how that can touch different people’s lives, is making me more hopeful.

What are some of the easiest ways to get involved to make stem a more inclusive and diverse place?

I think there’s so much that we can do. One organization that I help out a lot with is Street Code– before the pandemic when it was in person, I taught 7 to 12 year-olds game design. These systems use ROBLOX, which the kids love. In the class, we would create games, and what’s great about that platform is some of its drag and drop. This empowers the younger kids a lot, but even when the kids are just having a bad day and don’t feel like doing too much, the platform is a great teaching tool. Otherwise, the ones that were in the right mindset to challenge themselves could, and it’s about meeting people at their level. I never wanted to seem like you’ve got to come in, start memorizing and learning syntax and just doing work. It’s important to make it fun and create a safe environment for those trying to learn to make mistakes.

Getting involved with organizations like Street Code, where it’s people at a younger age and introducing them to tech. But then I also think it’s, as we get older and in the workplace, like little things: how there’s no stupid questions and making sure no one feels that way when they speak up. Otherwise, just getting involved in your community, and making sure you’re not being a gatekeeper to someone else.

If you could give a piece of advice to your younger self what would it be?

Oh my gosh; I would tell her so many things!

A quote that I love is, “Believe in yourself and you’re halfway there.” If you think you can’t do something, then every little problem or inconvenience that happens leads to you feeding yourself excuses. But when you really try, and change your mindset to one of positivity; that you can do things, that you will get through it. It’s your journey, and you can’t compare yourself to where everyone else is at.

Beyond that, finding your people is so important! I spent too much time forcing myself to be around toxic people in learning environments when it wasn’t what was best for me. Even when you’re in a learning group, and no one knows more than 5 percent, you can struggle together and figure it out. Going through that process ends with you actually knowing it better than if someone just told you what it is.

What are some of the challenges of having an educational, content creation platform that people might not think of?

I didn’t think I was going to get a lot of hate online because I’m just talking about getting into tech. I did a video once that I was talking about resumes, and I had posted it to YouTube. Either the company or the algorithm saw it, and they decided to highlight it. It was a great opportunity for me and my videos, but people were just coming for my race and coming for my gender. That was not even something I even mentioned in that video– it wasn’t even like, “resume tips for Black people,” but they just came for me all the same.

That stuck with me for a while, and I ended up asking myself: do I want to do content creation? That was a big moment and challenge, but I kept going. It goes back to who I am, and I’m not going to let somebody stop me from doing me– which was what got me into computer science in the beginning.

Balancing everything is another challenge, because I do have a 9-to-5, 40 hours a week type of job. Sometimes people get on me about not posting, but I still have meetings and due dates! I’ve got a job! [laughs] Things get worse when you’re also fighting the YouTube or TikTok algorithms, they both really like consistency. Things like Shorts and Reels and TikTok help to create a steady stream of quick videos, but I’m still trying to figure out a consistent routine for my long form content. It’s really when I have time and the motivation.

Full length videos are really fun to make, but I end up spending my whole weekend between filming and editing. But I always go back to my why– you never know when it’s this piece of content that can keep someone in this field. That confidence that they may need, and someone speaking to them and being real about everything. They might go on to create something so special in the future, and it really could be something as simple as because someone just believed in them.