One of the most frequent push-backs I hear from leaders of startups is that marketing just isn’t that important to them at the moment. I work with founders who are bringing emerging technologies to market, and by the time I speak with them, they’ve already convinced themselves (as well as their investors) that the success of this technology or product is inevitable. It’s just a matter of winning — of being the first and best to market, and grabbing as much attention as possible along the way.

The truth is, speed and differentiation are necessary, but not sufficient to success. Whether you invest in marketing or not, society loves to develop narratives, especially around new technology. And this isn’t limited to post-Internet society. Socrates famously detested the widespread use of writing because he thought it would make people forgetful. As far back as the invention of the telephone, individuals began to wonder if there was something unnatural about electricity that would change and even harm them. One can even see this now with the niche groups who are convinced that the outbreak of Coronavirus is directly tied to 5G Internet development. In these cases, these society-generated narratives don’t appear to have dramatically shaped the ultimate success of these technologies.

Others have not been as fortunate — specifically, the development and application of psychedelic drugs.

In November 1938, a Swiss chemist named Alfred Hoffman first synthesized lysergic acid diethylamide, better known as LSD. Its psychedelic properties were discovered several years later, and by 1947 the drug was commercially available for use in psychiatry, branded Delysid. It was distributed globally and studied extensively by US medical researchers through the early 1970s for its seemingly positive effects on mental and behavioral health conditions like depression and substance abuse.

It became a part of the cultural zeitgeist of the ’60s and ’70s with its own celebrity influencers from musicians and artists to writers and Harvard-trained psychologists. Despite all this, in October of 1968 — nine months before Americans landed on the moon — LSD was officially listed in the US as a Schedule I substance, characterized by having ‘no medical value and a high potential for abuse’.

So how did we get here? How did a drug with so much potential go from being a cultural touchstone to locked in a box, not to be researched for nearly 50 years?

Frankly, a complete lack of marketing.

Choose your customers and partners wisely.

In the case of every new technology — including drugs — who they become associated with matters. The lack of deliberate distribution of these drugs meant that they were reserved to in-groups that were already full of mystique — high-end New York psychiatrists with celebrity clientele, musicians and celebrities. The press generated from eccentric psychiatrists and countercultural artists talking about acid became the only story anyone followed in relation to acid, since rigorous medical research isn’t designed to be ingested and understood by the wider public.

With any new technology, an innovator’s mindset impacts how they conceptualize innovation and commercialization, and so does the zeitgeist. LSD came of age during a cultural revolution, and it was hard to shake those connotations — after all, every revolution has a vanguard and the status quo. To whom did LSD belong?

Amongst the heydays of Rock ’n’ Roll, civil rights and sexual liberation, LSD seemed to many to be like all the others; moral dangers to the fabric of modern society. No one who had become publicly associated with the drug worked to distance it from the other cultural debates, or specifically talk about the scientific and medical value of the substance — at least in any way that caught any serious attention at all. LSD evangelists spiking unknowing individuals with LSD didn’t help their cause either. When the CIA’s MK Ultra project was revealed in the 1970s, it only solidified public sentiment that the drug was bad — after all, the CIA had tried to use it in mind control experiments (let alone they were tremendous failures). Would you want to take a new drug that was associated with unethical psychiatry and mind warfare?

Hofmann blamed Timothy Leary, the renegade Harvard psychologist turned psychedelic guru, for the backlash against LSD and other psychedelics in the 1960s. “You should not tell everybody, even the children, ‘Take LSD! Take LSD!’” Hofmann said. — Scientific American

Most of the 1960s’ LSD evangelists we’ve come to know believed in the power of the drug to effect positive change. But in the midst of a cultural revolution, it was imperative to the long-term success of LSD as a drug that it not be seen as a part of that war. That the average person didn’t have a therapist or psychiatrist, nor was inclined to see Paul McCartney, Jack Kerouac or Allen Ginsburg as relatable people limited the technology. For them, LSD was nothing more than a passing fad driven by youth culture. 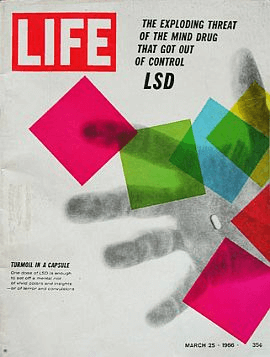 The people who presumably stood to gain the most from LSD were actually not the youth at all — they were members of the ‘greatest generation’ who had been through economic depressions, wars, and profound hardships before arriving in the Golden Age of Capitalism. Where was their spokesperson? What were they supposed to think of LSD?

When there’s no language for the average person to use, folklore and gossip end up filling in the vacuum. This is perhaps the reason that 40 years after LSD was banned, it’s still not uncommon to hear people say taking LSD a certain amount of times leads to insanity.

Fortunately, we’re seeing the tide finally change. LSD and other psychedelic medications are being studied again for their power to affect positive mental health. Companies including MindMed, Compass Pathways, and FieldTrip are building drug development pipelines for hallucinogenic drugs like LSD and psilocybin (commonly known as “magic mushrooms”) to address mental and behavioral health conditions like depression, PTSD and substance abuse.

So the next time someone tells you success is inevitable because their product is just that good, point them to Albert Hoffman.